That rebellious energy lives on. Capture it with our latest Bowie edition. Shop Now

Your bag is empty

A New Photobook Honors the History and Future of Polaroid Photography

The following is an excerpt from the new photobook, Polaroid Now, The History and Future of Polaroid Photography, by Steven Crist, with contributions from Polaroid CEO, Oskar Smolokowski. This essay, titled “Polaroid Then and Now,” is by Oskar. Explore the beautifully curated pages, featuring some of the most famous photographers in history, and most exciting new voices in Polaroid photography today.

Polaroid is one of the few companies in the world that can truly say it invented magic.

I discovered this magic for myself in 2011, in a store hidden away in a fifth-floor loft in lower Manhattan. Walking around the beautiful space with huge Polaroid photo enlargements covering the walls, and the legendary SX70 in my hands for the first time, I could immediately feel the significance of what was on display—even though I knew nearly nothing about it back then. I was twenty-two and completely unaware that my life was about to change forever. My journey to ensure a future, and fight for these incredible products and this incredible brand was about to start. There are many books and articles written about the history of Polaroid and its legendary founder Edwin Land, and my short introduction is not meant to be a match for them. Instead, I’d love to share the parts of the story that captured the hearts and minds of myself and our new team at Polaroid: the reason we continue to work hard at Polaroid now, eighty-three years after the company was founded.

The first thing that jumped out at me when I learned about Polaroid’s history was Edwin Land’s incredible drive and curiosity. He was relentless in his pursuit of answering questions and inventing ways the world could be better. He would often sleep in his lab to keep working on projects that were “manifestly important and nearly impossible,” as he himself put it. Polaroid was founded on this insatiable curiosity. The technical inventions that came out were then turned into products that were useful, magical, and most of the time extremely profitable. Throughout Land’s life, his curiosity never faltered. He never stopped exploring new ideas and meticulously patenting all of them, which resulted in 535 patents to his name!

Land’s first big breakthrough invention was the thin sheet polarizer: a core technology that is used to this very day in LCD screens, sunglasses, and countless other applications. This is where the name Polaroid comes from and the invention’s commercialization is what the company was focused on in its first years after its founding in 1937. It would be more than ten years later until Polaroid would first bring the idea of instant photography to the world.

The story of how Polaroid got into the business of inventing instant photography goes more or less like this: In 1943, after a day out walking around and taking pictures on a Rolleiflex camera with her dad, Land’s three-year-old daughter simply asked,

“Why can’t I see the pictures now?”

They were sitting at home with no pictures to look at as a camera like this (and all cameras made at the time) required developing the pictures in a darkroom lab, a process that takes at least a few days and lots of specialized chemistry and equipment. This question got Edwin Land thinking about the problem. In true Edwin Land style, he thought deeply, recruited the best scientists to the project, and worked day and night until the first instant photo product from Polaroid was launched in 1948. This new instant camera was revolutionary: bringing the magic of creating a photograph right in front of your eyes to the world for the first time. It was a product right at the intersection of art and science, powered by incredibly complex chemistry and enabling a world of creativity. This idea of business being at the intersection of art and science became a guiding north star for Polaroid - a star we still look toward today. In fact, it was such a winning formula that it inspired another famous company visionary at Apple, Steve Jobs, who baked their version—“the intersection of liberal arts and technology”—deep into the values of his company as well.

By 1972, Land and his team at Polaroid transformed instant photography products from the initially giant and heavy cameras that required peel-apart film to the now legendary, incredibly slim SX70 camera that used integral film with no need for peeling anything apart. Just point, shoot, and watch the magic happen as the photograph develops in front of your eyes. This is when the most iconic Polaroid format was born, the one I was holding in my hands in the gallery in New York, taking it all in. The legendary white frame, with its unique proportions and incalculable impact on culture and art. Armed with this new and revolutionized instant technology, Polaroid took the world by storm, growing to a two-billion-dollar-a-year business. The impact on culture was impressive; artists from Warhol to Hockney and Haring to Basquiat were all using Polaroid regularly—sometimes in their work and often in their personal lives. The company’s brand and products permeated pop culture, and nearly fifty years after the invention of this iconic instant photo format it is still recognized, cherished, and used by millions of people around the world. 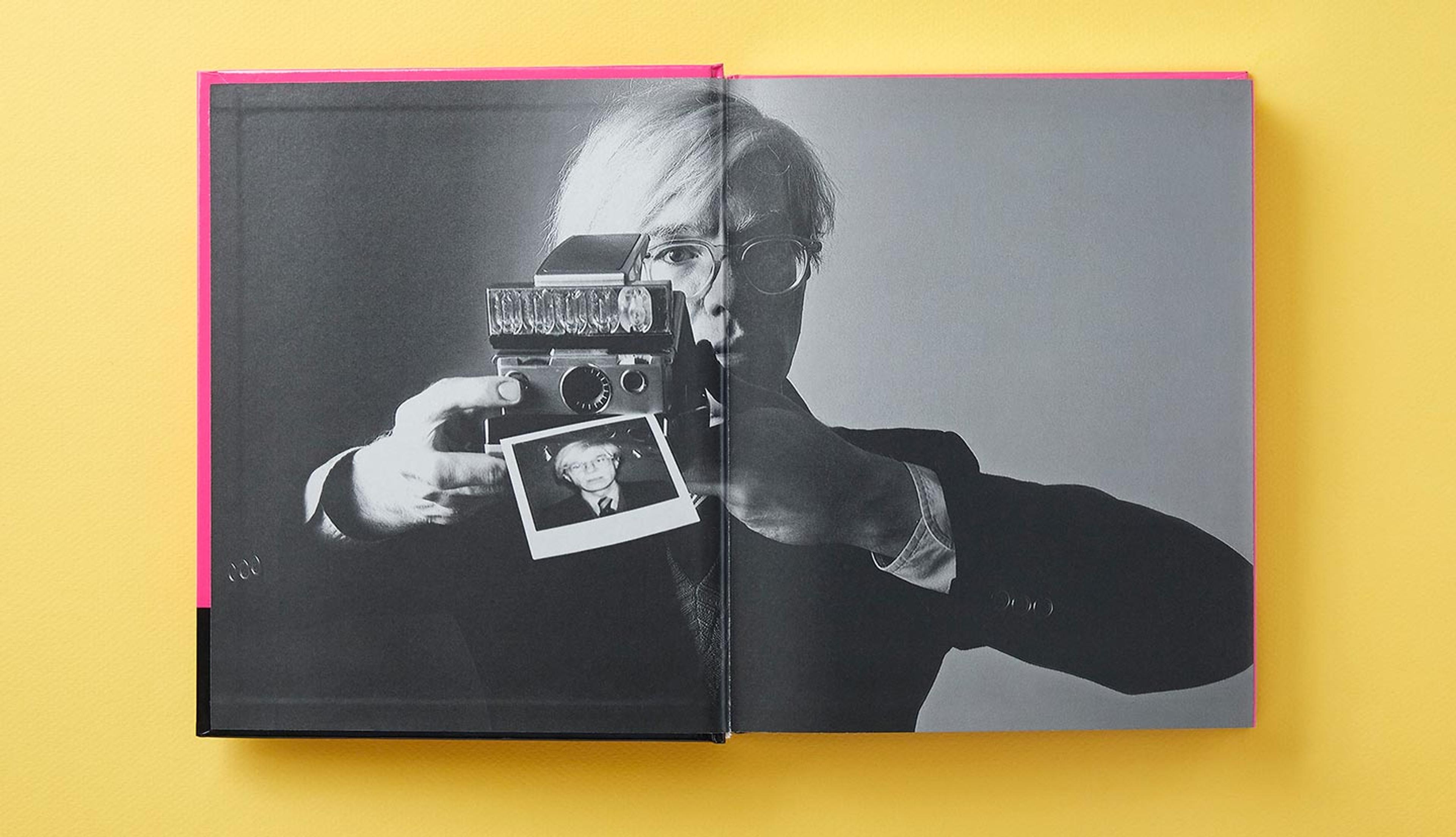 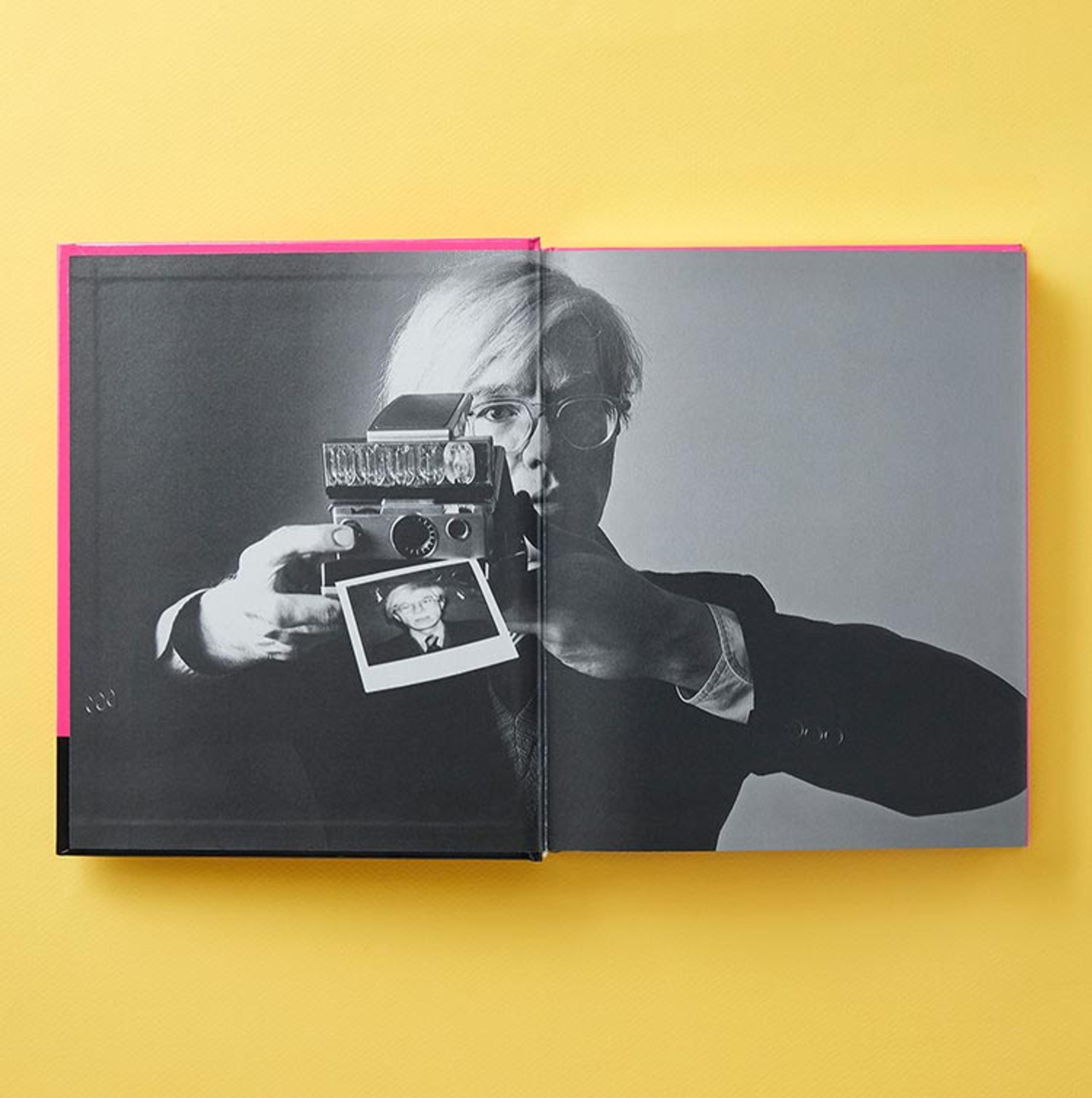 Andy Warhol takes a Polaroid. A photo spread from the book, Polaroid Now, The History and Future of Polaroid Photography.

I believe the reason why the Polaroid brand managed to resonate so deeply with people is how the company managed to connect what it did to fundamentally human values. This quote from Land in particular struck me as beautiful and resonating exactly this sentiment, as he described his observations of people using Polaroid products:

“It turns out that buried within us ... there is latent interest in each other; there is tenderness, curiosity, excitement, affection, companionability, and humor. ... [W]e have a yen for, and a primordial competence for, a quiet, good-humored delight in each other: we have a prehistoric tribal competence ... in being partners in the lonely exploration of a once-empty planet.” 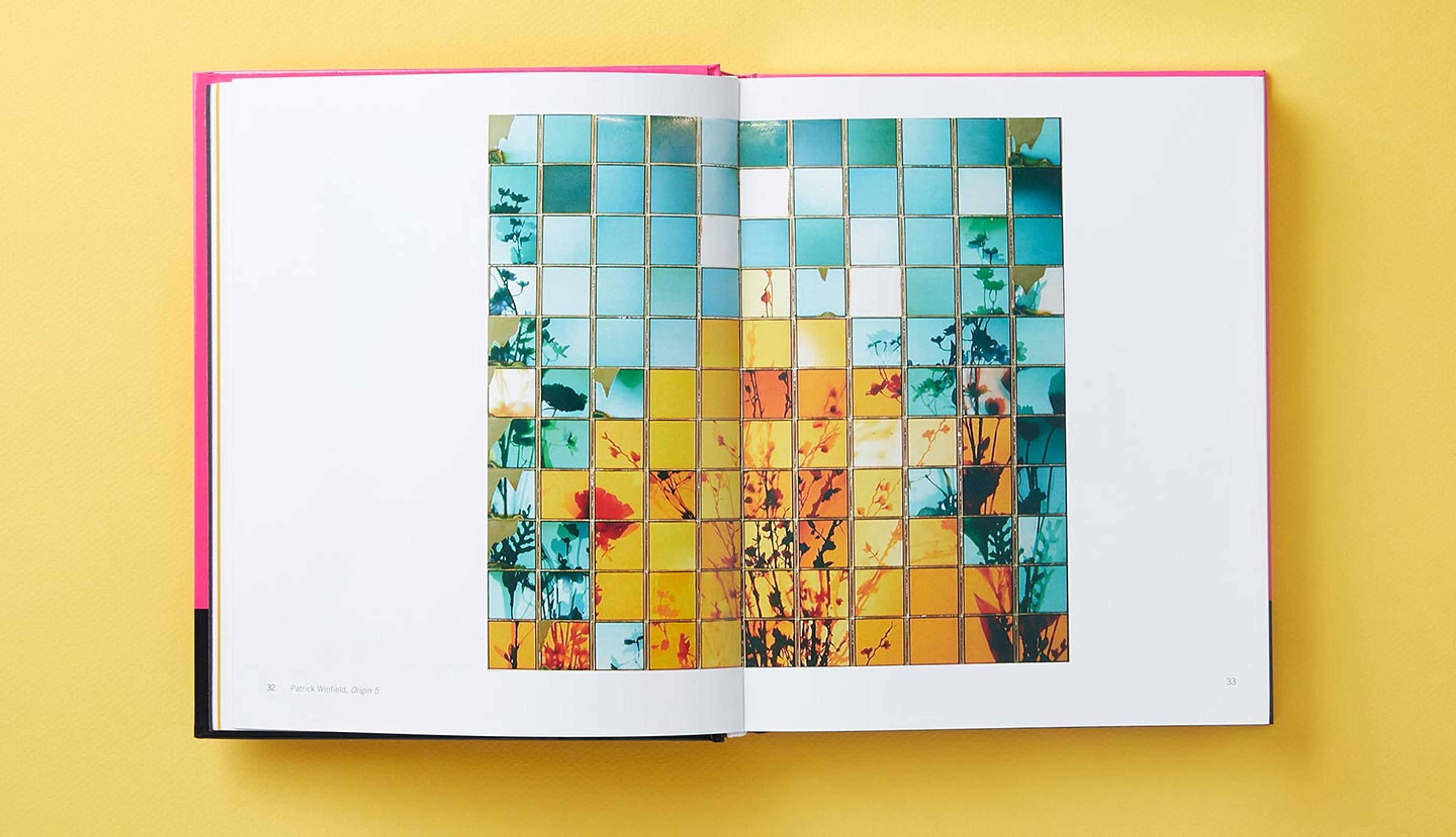 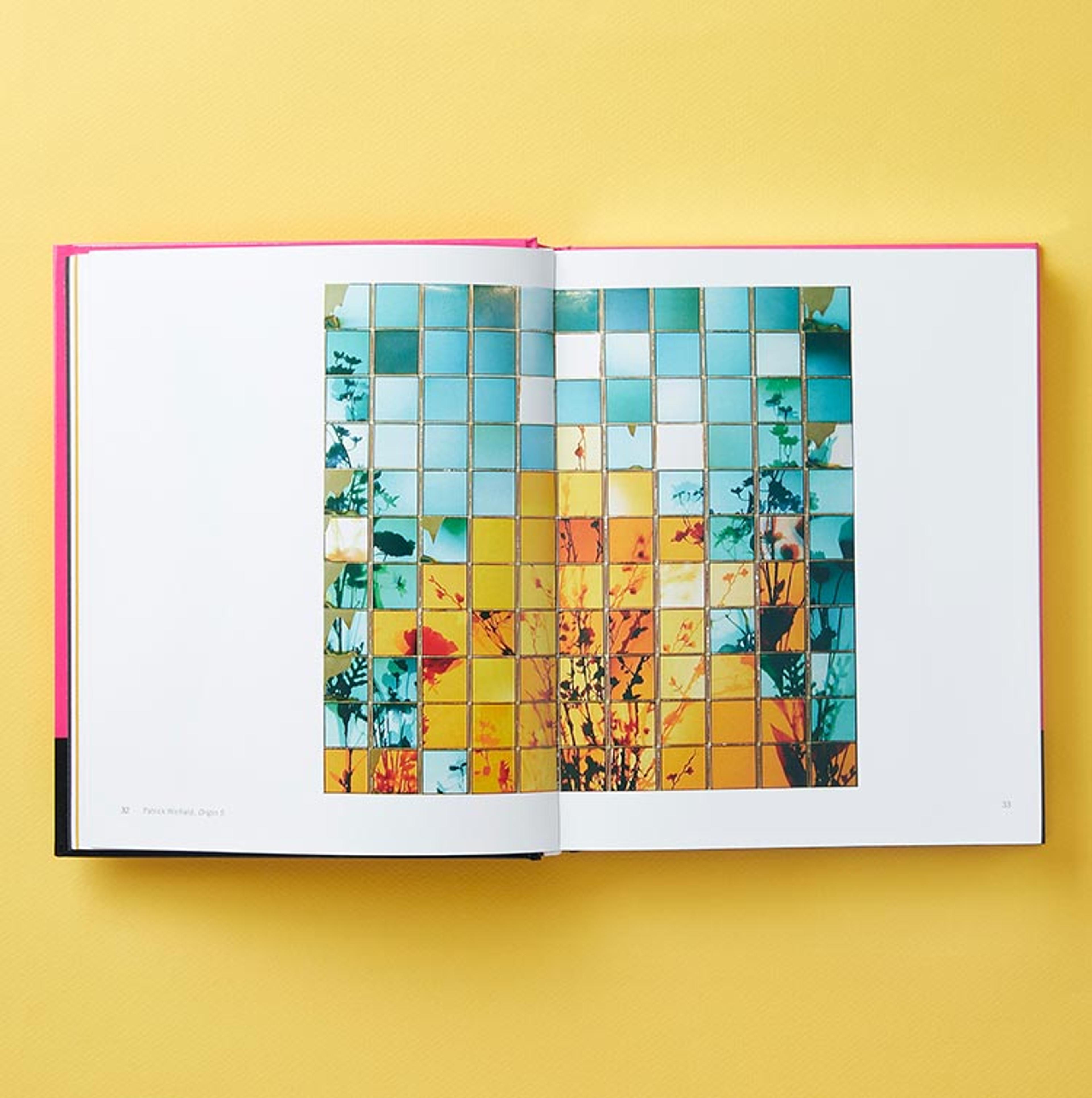 A spread from the book featuring photos by Patrick Winfield.

The tools Polaroid made, the stories that it told, the way it cared about the magic of everyday moments and empowering creativity for all gave it the staying power few brands in history have enjoyed. Unfortunately, after a failed billion-dollar project that was meant to revolutionize instant video capture, called Polavision, Edwin Land’s days at the company were numbered. He was forced to step down and retired in 1982 to focus on the science of color and the way we perceive it, called Retinex theory. Polaroid was still a mighty business for years to come, and only started having serious problems in the late ‘90s into the 2000s.

To tell the next part of the story I need to go back to the loft where my Polaroid journey began. The name above the door wasn’t actually Polaroid, it was The Impossible Project. After a series of bankruptcies between 2001 and 2008, and as digital photography took hold, it looked like Polaroid would stop making its iconic film forever, and history would close this chapter in history. But the love created around the world was so strong that it brought some people to the rescue. The heroes came from where you would least expect them—a spider eye PhD named Florian “Doc” Kaps, and his family and friends, managed to purchase the last factory, literally days before it was scheduled for scrapping. They immediately got to work restarting the original instant film machinery. To make this work, they would need to revolutionize the chemistry inside the film to make it manufacturable at a lower scale, and within today’s environmental regulations. That was in 2009, and by 2012 they had managed to make good progress. At the same time, Polaroid the brand lived on as strong as ever, with new ownership developing a successful licensing program.

I joined The Impossible Project shortly after my visit to the store, both as an investor and an employee; and by 2016 we managed to make great progress in setting up the company for success. But we all knew from day one that the mission was to reunite with Polaroid—after all, we were making Polaroid film! In September 2017, on Polaroid’s eightieth birthday, we launched Polaroid Originals. We managed to put the pieces back together and reached a deal to reunite the factory and the brand under one roof and ownership. 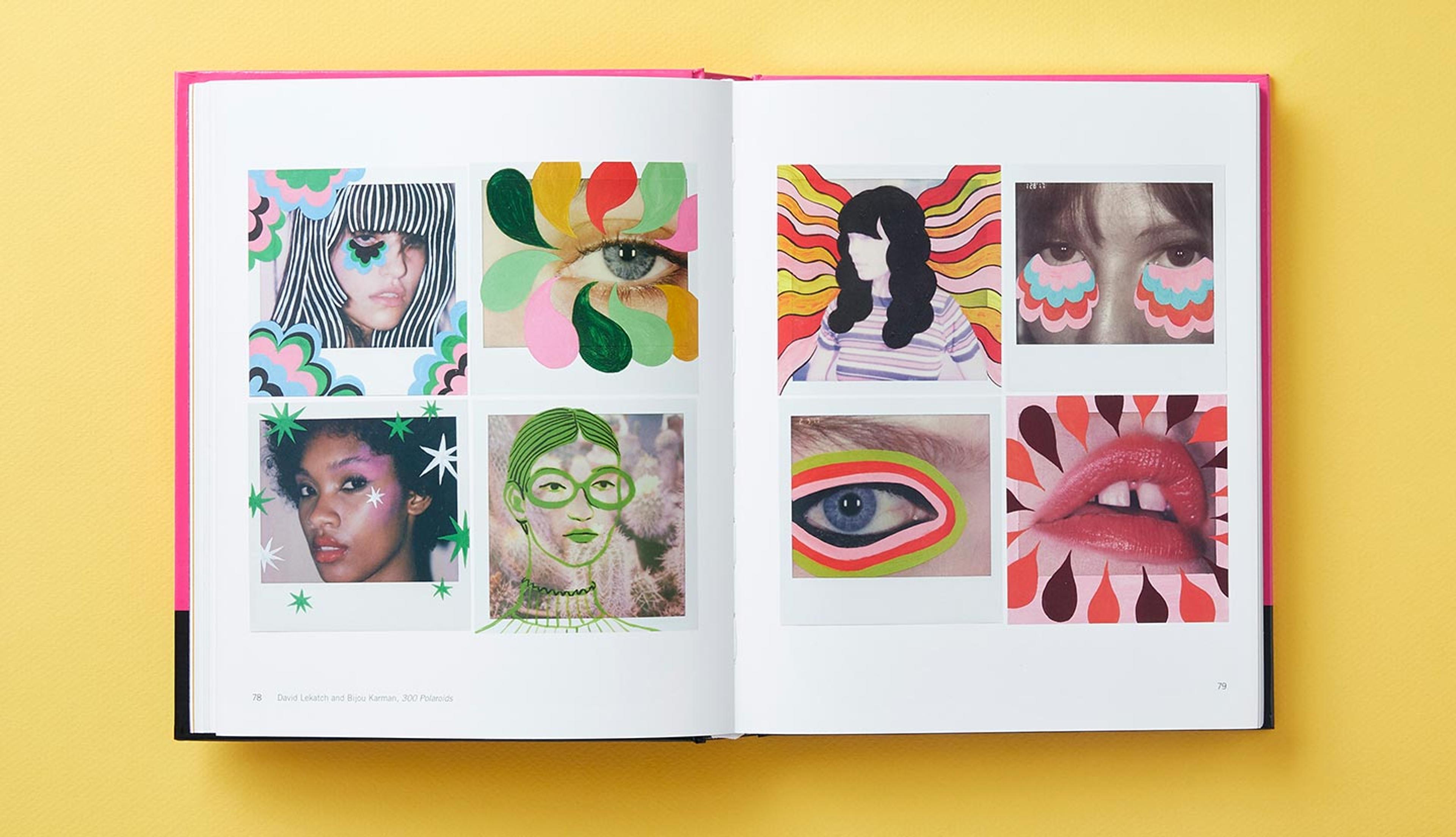 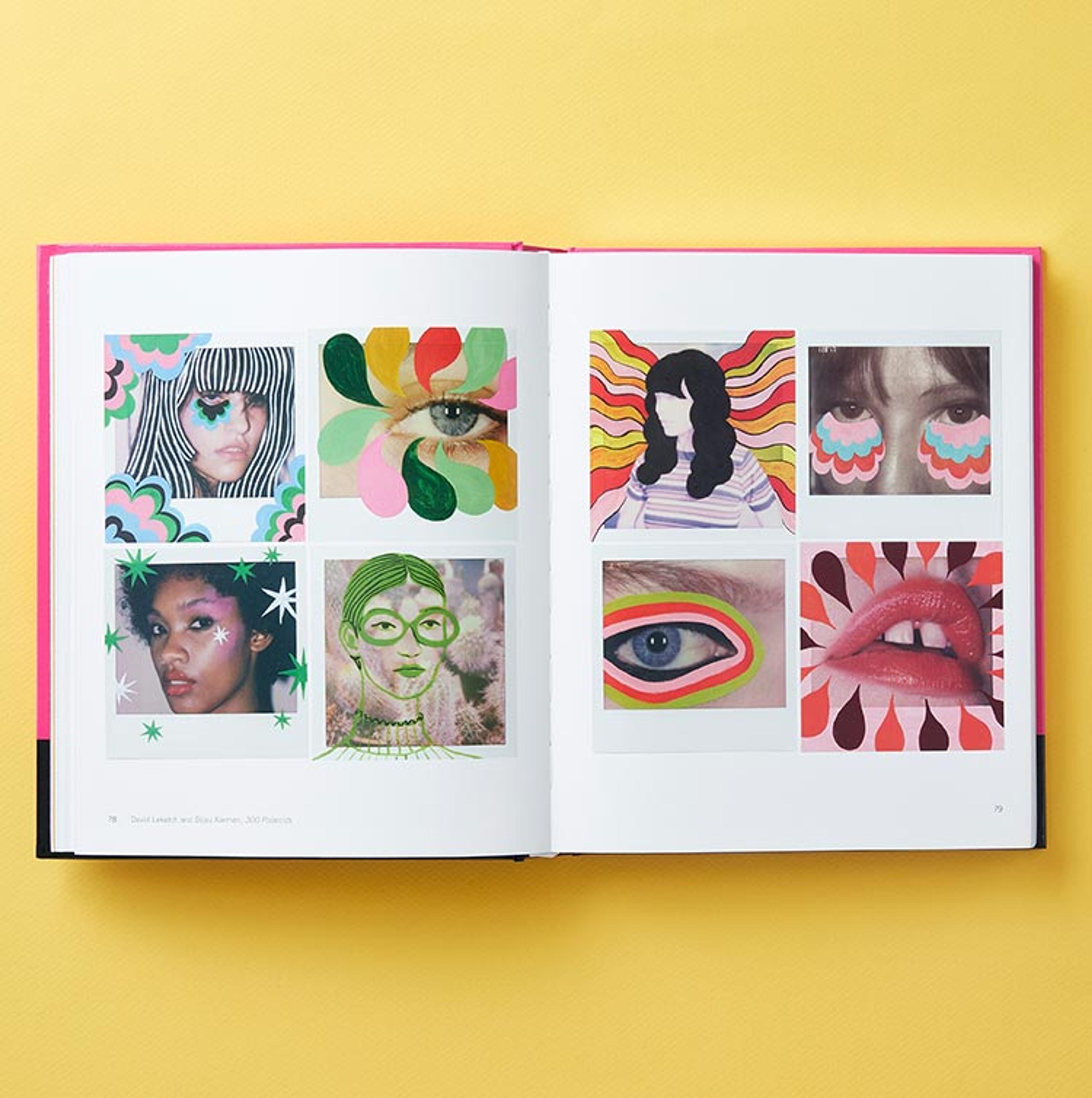 A spread from the book featuring photos from David Lekatch and Bijou Karman.

And that brings us to what Polaroid is now, and where it’s going. At the end of the day, we are just a bunch of people who are excited and proud about the opportunity to take the brand and what it stands for forward. We love instant photography; it’s still the heart and soul of the brand, and we have big plans for it for years to come. But we also plan on taking the brand further. We’ve reignited the curiosity of our scientists and are exploring new fields of chemistry that can help the world become a better place. We’re looking toward the intersection of art and science to guide us as we plan our next products. We aim to bring tools and initiatives to continue empowering creative culture. And, perhaps most importantly, we want to stay true to contributing to a world that is more human and meaningful, bringing creativity, delight, and magic to anyone who crosses paths with Polaroid. 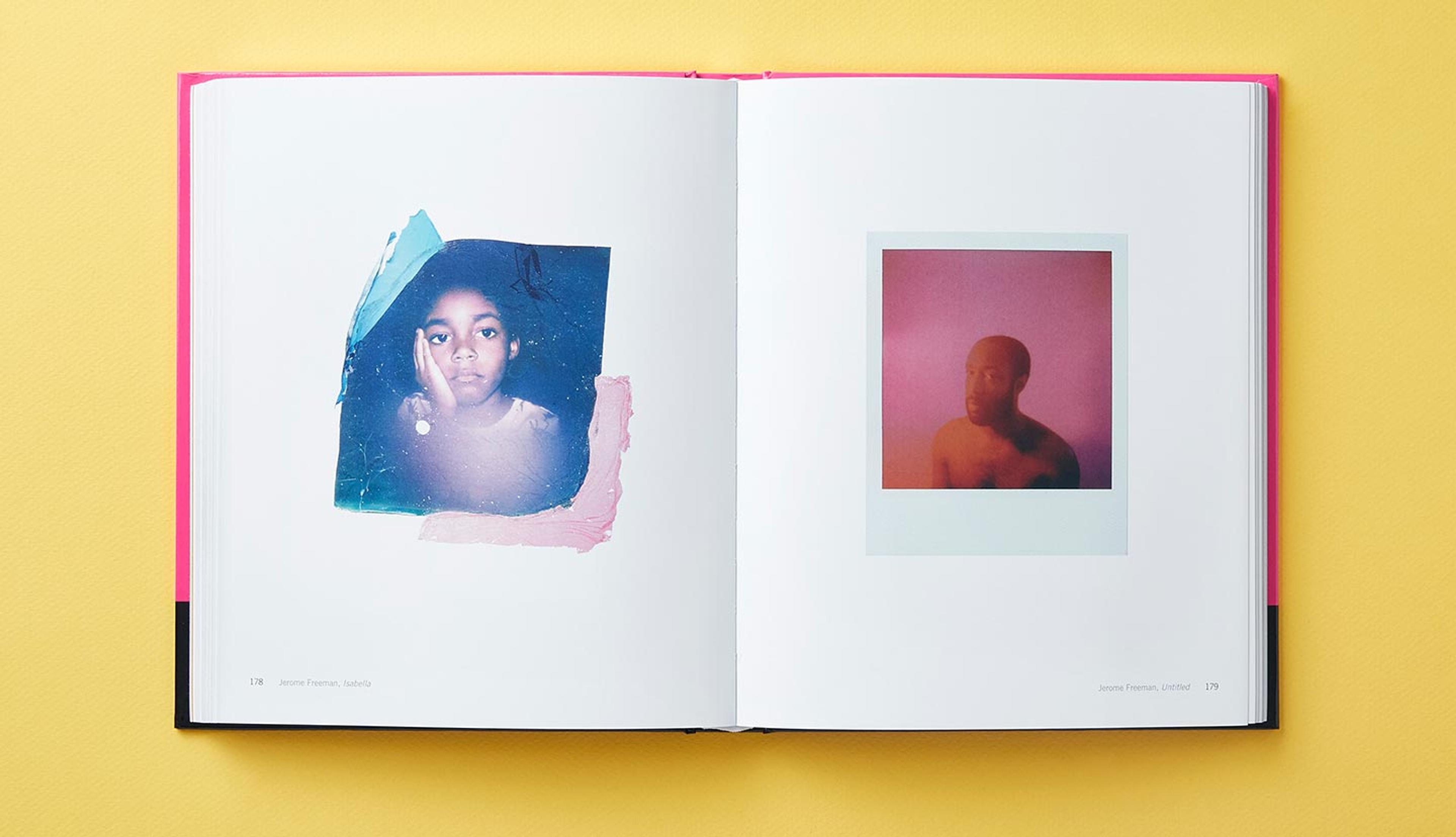 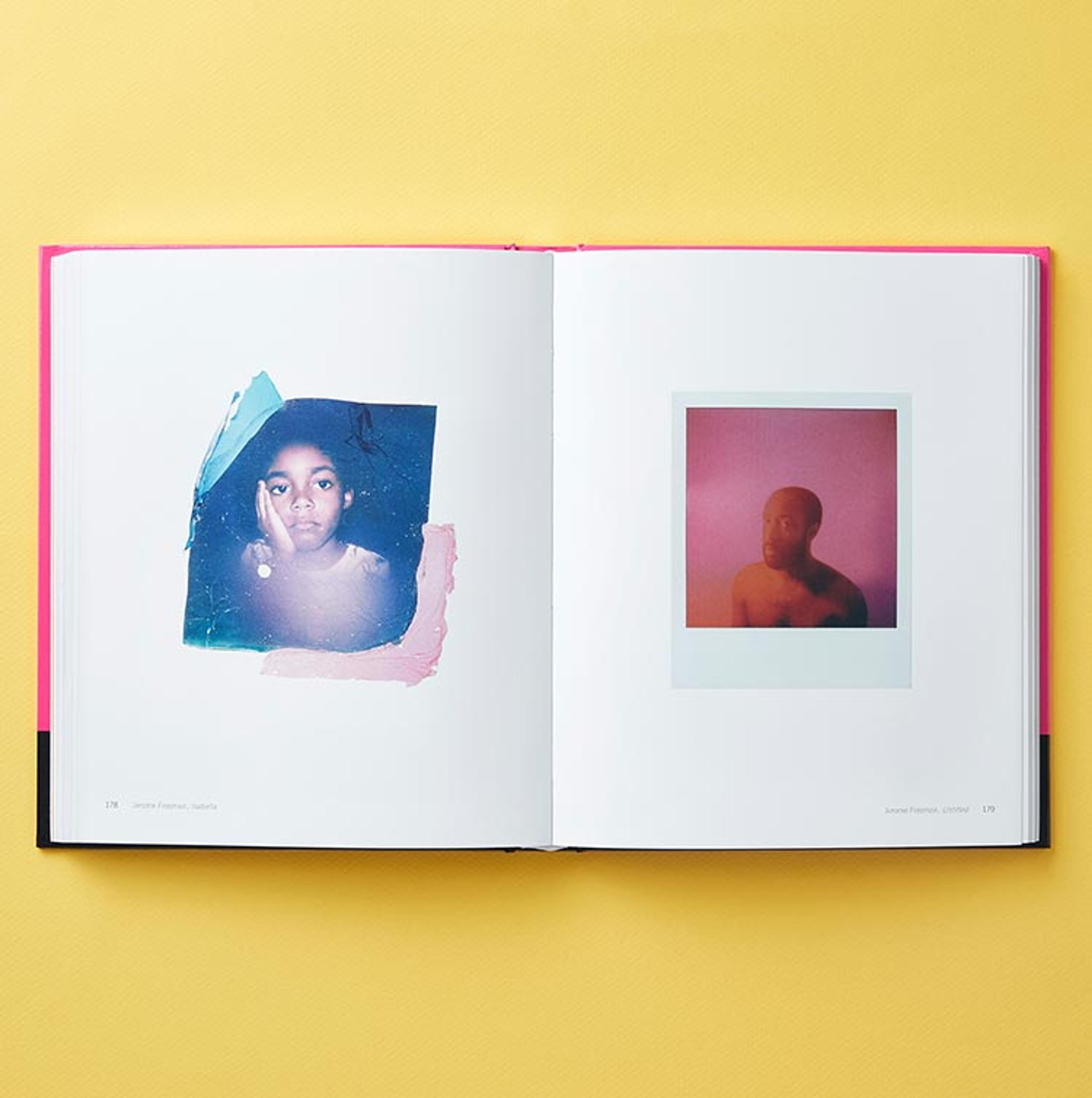 A spread from the book featuring photos from Jermome Freeman.

Get our latest updates and 10% off your first order